The cut speeds of automated cutters are an important factor in the specifications of a machine but it can be difficult, especially for someone who is not experienced, to evaluate each manufacturer's specifications.

At Aeronaut, we make industrial-strength, heavy duty cutters and we prefer to give fairly conservative values, speeds which you can achieve day after day in real life cutting without breaking anything, and without wearing out parts like racks, pinions and bearings. 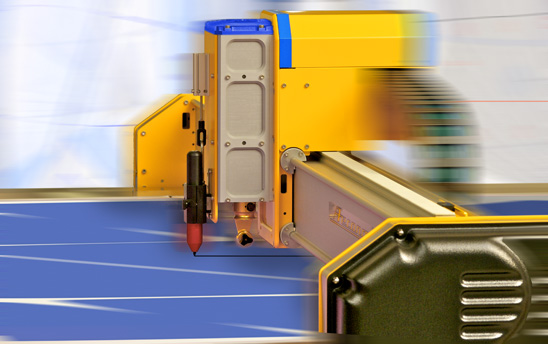 Lightweight cutters will accelerate and move faster than heavy-duty ones but the downside is that to achieve a light weight, everything has to be made small and light including pulleys, gears, motors, belts, bearings and guides compared with the heavy duty machine.

Aeronaut automated cutters are generally over-engineered and are tested at speeds up to twice the stated cutting speeds. Most Aeronaut machines are capable of straight-line speeds considerably in excess of the stated speed, but in practice, very high cut speeds are not always possible or desirable. Very few customers actually want to work consistently at these speeds and normally ask for more conservative speeds and acceleration values to be set when the machine is commissioned.

Any machine which is run at high speeds will be likely to show increased wear and tear compared with machines which are run at moderate speeds. This applies to everything from cars to automated cutters. One major manufacturer introduced a new machine which was 50% faster than previous models. When the machines started working in customer's factories and started breaking parts, the manufacturer's service people quietly went around altering the parameters to slow the cutters down to more reliable speeds and the customers never knew.

Cutting speeds are dependent on several factors including the material being cut, the tool being used to do the cutting, the available vacuum hold-down, the porosity of the material, the width of the nesting gaps... and so on. Additionally, machines have to slow down on curves and corners so cut speeds will vary from shape to shape.

With good vacuum and adequate nesting gaps, many materials can be cut at speeds well over a metre per second, particularly with machines like laser cutters where there is no contact between the cutting tool and the material being cut. In most cases practical cutting speeds will be between 700 and 900 mms/second with blade cutters and higher with lasers.

Marking speeds with ball-point pens and markers are normally lower than cut speeds because of a number of factors:

Off-contact marking with ink jet markers does not show these limitations.

Aeronaut's cutters have an intelligent speed control algorithm in the motion controller which makes sure that you can cut at the highest speed that you set. It looks ahead at and controls the speed in and out of tight curves and corners so the cut speed is optimised.

Tangent's template feature makes it easy to set the right speed for each tool as well as ramp and acceleration to get the fastest overall speed over a shape. Additionally, markings can be separated into pattern numbers and markings so that each is performed at the right speed for the type of entity being marked.

Aeronaut cutters can be fitted with a fabric gripper/puller so even wide and heavy fabric can be pulled onto the cutting table in the minimum time, without stretching or twisting the fabric or the operator.

Aeronaut cutting tables can be easily zoned into several bays under software control so that you can choose to cut in one area of the table while picking pieces from another.

If the total time to cut is critical to your operations, Aeronaut is always willing to video timed cut tests on your patterns and your materials.