Aeronaut Automation is an Australian company specialising in the manufacture of wide span flatbed plotter cutters. Our factory is situated in Terrey Hills, in a small industrial area in this otherwise residential suburb on Sydneys northern peninsular. The factory is about 25 minutes from Sydneys CBD and 7 minutes from the beach.

Unlike other companies manufacturing automated cutters, Aeronaut began as sailmakers… Aeronaut Sails, specialising in sails for round the world, single and shorted handed boats and fast multihulls.

We bought a basic pen plotter in 1987 and soon found that the software available would design products like sails, but not basic things like boom covers, bags and biminis, so we set about developing our own.

The change from Aeronaut sails to Aeronaut Automation came about when another sailmaker said that he wanted to buy a cutter and he wanted us to make it for him. After selling six cutters in five weeks to various marine businesses we decided that was where the future lay for Aeronaut.

This makes our focus quite different to other manufacturers. We build the machinery we would like to own. As a result, the cutters we make are high performance machines but heavier duty than almost all of our competitor's products. This has given our machines a reputation for long life and reliability. In fact, every machine we have ever made is still running and our cutters regularly replace worn out or inaccurate machines made by other manufacturers.

Another big point of difference is that Aeronaut makes the full range of cutters from simple, low-cost entry level machines right up to ultrasonic and laser cutters and string sail machines costing hundreds of thousands of dollars. A customer can get the machinery and software they need without having to change suppliers for each element.

Aeronaut makes every effort possible to keep old machines working, even when the parts which Aeronaut does not make are made obsolete by their manufacturers. Mainly this applies to motion controllers but we can proudly say that we can make any part or substitute any electronics to keep any of our machines working for their owners.

Aeronaut has just taken delivery of a new DMG Alpha 500 CNC machining centre to replace our old CTX 320. The new machine is similar to the old one an X/Y/Z/C axis turning centre with 12 driven tools. Apart from newer software, the Alpha 500 has a larger bar capacity than the CTX which means we can produce our larger machine components with less waste. Load up a metre or so of 65mm diameter material, press the go button and the machine will spit out parts until the bar stock runs out.

Being able to call on machines like this allows us the freedom to conceive, design and manufacture complex parts to the very high level of accuracy required. A good example of this would be a Cam-lock tool holder. 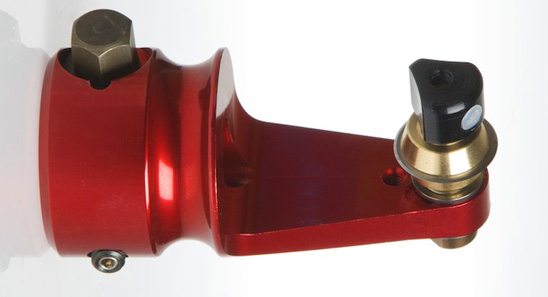 The entire tool holder body is produced in one operation using all the capabilities of this machine including drilling, tapping, reaming and milling on all axes. The result is a tool which is perfectly accurate and square in all planes.

We were delighted to see that Total Window Concepts of Melbourne had been visited last year by Julia Gillard, now Australia's new prime minister and the first woman to have that role. It's difficult to restrain the comment that Julia Gillard must have approved of the Aeronaut cutters or Aeroblinds software which was shown to her on her visit to the TWC factory but she looks approving! 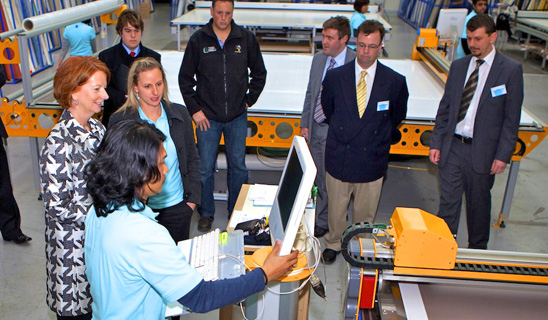 Workers at the companys hoppers Crossing factory were given the opportunity to complete their Certificate III or IV certification in competitive manufacturing. For many of the workers at TWC, it was the first opportunity theyd had to undertake any sort of formal qualifications. A bold decision by the TWC, which had at one stage considered moving production offshore.

To mark the completion of study, TWC held a graduation ceremony, with a special appearance from the Deputy Prime Minister Julia Gillard, who took the chance to praise both TWC and the companys employees for their commitment to the training and manufacturing in Australian. 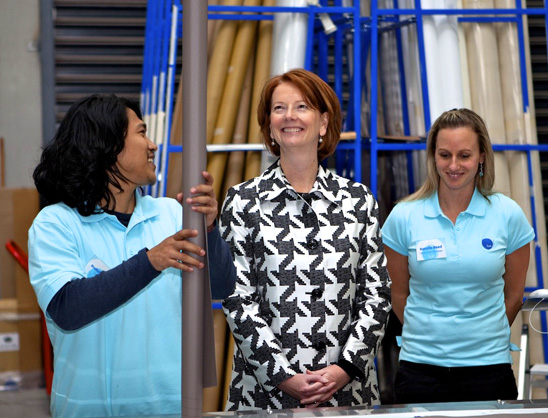 We can be a bit blasé about this sort of thing in Australia A factory visit from a senior government member would be a huge event in most other countries and they'd dine out on it for years. Aeronaut congratulates TWC for this initiative! We share their commitment to manufacturing in Australia.

You can read more about the TWC story here

Quality is remembered long after the price is forgotten.

Aeronaut automated cutters are not the cheapest cutters on the market. Although the advantages to most businesses of owning one of our cutters can usually be easily proved in dollars and cents increased productivity, reduced labour costs, reduced waste and mistakes and so on, it's usually the larger companies who are the most open to this argument and sometimes smaller businesses can look for cheaper machines, which frequently don't offer the full advantages of automation.

When Markk Cucek from FA Blinds went looking for a cutting machine, they took the bold step of going straight from hand cutting to an Aeronaut machine. As Markk says "Most small companies move from hand cutting to a simple single-side blind cutter and although this may improve quality and accuracy, it does little for productivity or waste. Our Aeronaut cutter has made an incredible difference to our production. The machine will cut a normal days work by tea break.

Output has more than doubled. From the 50-60 blinds per day which were cut by two people, the aeronaut cutter can produce over twice this many with just the one operator. Waste is also down to four percent.

When you can nest and cut more than one pattern on a length of fabric on the table, its a lot easier to get the best fabric use. Now, the amount of waste from a days production could easily fit into a small plastic shopping bag, which represents a huge saving in expensive fabric.

You can read more about the FA Blinds story here

You can read more about Aeronaut's history here